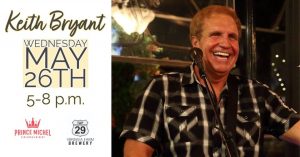 Join us for live music by the amazing Keith Bryant on Wednesday May 26th from 5-8 p.m.! By age fifteen, he had formed his own gospel band and began teaching himself piano. From there, he began playing in local bands as well. Bryant won best male vocalist at age 19 in the East Coast Country Music Championship, and then formed a band called Ironhorse. In his career, he has released four independent studio albums, including one on Lofton Creek Records. He charted for the first time in 2004 with the single “Riding’ with the Legend”, which Bryant co-wrote as a tribute to former NASCAR driver Dale Earnhardt, who died in 2001. The song peaked at number 47 on the Hot Country Songs chart. The kitchen is open from 12-8 p.m. and serving the best pub grub around! Check out the full menu here:Â https://www.princemichel.com/pub-grubÂ
http://www.princemichel.com