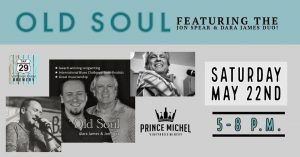 SATURDAY, MAY 22, 2021 AT
5 PM EDT â 8 PM EDT
Old Soul Live!
Jon Spear and Dara James â also known as Old Soul â are a pair of award-winning singer/songwriters who use their formidable guitar, harmonica and vocal skills to present a variety of songs in the blues, folk, and classic rock genres along with, of course, original songs. The duo is one-half of Charlottesvilleâs popular Jon Spear Band whose music is heard at numerous local venues and has been on the Top 50 blues music radio charts in the US, England, Australia, and France for the past several years.
Dara started playing music at age 5 when his grandfather gave him his first harmonica. He joined his first band at the age of 11 and started playing guitar when he was 14. Jon Spear wonât admit how long he’s been performing but here’s a hint: Jonâs first band opened for the Isley Brothers at the Capital Theatre in Port Chester NY when Twist and Shout was top-40 hit. In 2019 the pair competed in the prestigious 35th International Blues Challenge where they were semi-finalists.
Pub Grub is available from 12-8 p.m. Check out the menu here:Â https://www.tap29brew.com/menusÂ
http://www.princemichel.com