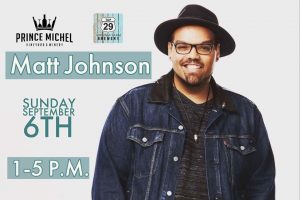 Matt Johnson is a local favorite and will be back at Prince Michel Sunday September 6th from 1-5 p.m.! He started performing at a young age around the Shenandoah Valley in various productions and has been entertaining the masses ever since.
More recently Matt has performed all over the country in Virginia, NC and SC, Atlanta, Houston, Austin, and more. In 2015 Johnson’s own previous band, MOON, headlined The National Theater in Richmond, Virginia. He also recorded with Charlottesville legend, Butch Taylor, longtime touring keyboardist for Dave Matthews Band.
Matt delivers a unique R&B sound along with powerful performances.
With influences such as Alicia Keys, Stevie Wonder, John Legend, Michael Jackson, Dave Matthews Band, Elton John, and more, Matt’s vocals and piano playing will provide a warm cup of love for your soul.
http://www.princemichel.com